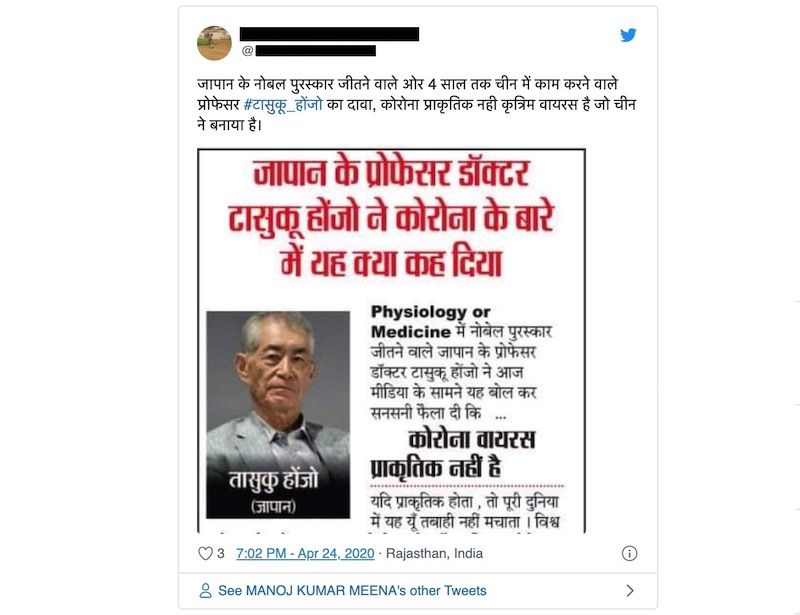 Fabricated information claiming that Distinguished Professor of Kyoto University and awardee of the 2018 Nobel Prize in Physiology or Medicine Tasuku Honjo has purportedly said that the novel coronavirus was artificially created in a Chinese laboratory has spread widely in India and in other parts of the world.

The English-language post, which has been circulating on Facebook since April 24, begins with, “Japan’s Nobel prize winning Professor of Medicine, Professor Dr Tasuku Honjo, created a sensation today by saying that the Coronavirus is not natural.” And follows with him allegedly saying: “It is not natural. It is manufactured and the virus is completely artificial.”

The post also claims Professor Honjo had worked in a laboratory in Wuhan, China for four years and added that he supposedly said, “Based on all my knowledge and research till date, I can say this with 100% confidence – That the Coronavirus is not natural. It did not come from bats. China manufactured it.

However, based on Professors Honjo’s biography, we were not able to find any indication he had ever worked for four years at the Wuhan Institute.

On his own website, Professor Honjo urges increasing PCR testing in his “Urgent Proposal for the Novel Coronavirus,” but nowhere is there any mention that the novel coronavirus was man-made in a Chinese laboratory.

Upon notification by the Indian fact-checking organization BOOM, the FIJ contacted the Institute for Advanced Studies at Kyoto University, where Professor Honjo serves as vice president. They categorically denied the contents of the post, saying it was “fake news.” Additionally, they unequivocally denied any past enrollment by the professor at any laboratory in Wuhan.

Professor Honjo later issued a comment in English stating: “In the wake of the pain, economic loss, and unprecedented global suffering caused by the COVID-19 pandemic, I am greatly saddened that my name and that of Kyoto University have been used to spread false accusations and misinformation.”

The original fact-checking report by INFACT in Japanese is here.