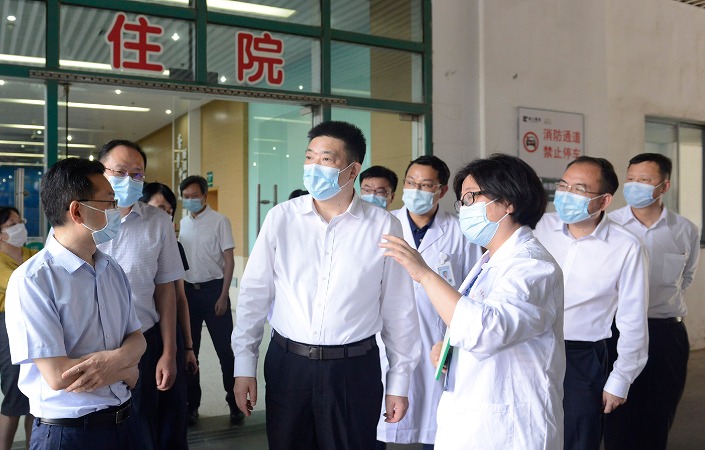 It is already widely known that the novel coronavirus first appeared in Wuhan, China.  U.S. President Trump sometimes refers to it as the “Wuhan virus” or something similar to emphasize that it came from China. Trump also indicated that China was initially covering up the problem. What was the actual situation? What was invoked and what was not? “In Fact” took a closer look at the contents of the published Chinese records. First of all, let us start with the first week of January 2020.

It was New Year’s Eve, December 31st 2019, when the Wuhan Municipal Health and Hygiene Committee made its first announcement.

“Numerous cases of ‘viral pneumonia of unknown origin’ related to the South China Seafood Market (Seafood Wholesale Market) have been reported in many medical institutions. At present, 27 cases have been identified, 7 of which are severe, the rest are stable and controllable, and 2 are improving so that they can be discharged soon. No human-to-human transmission has been identified.”

The symptoms of  the ‘viral pneumonia of unknown origin’ have also been described.

“The clinical symptoms of the cases were mainly fever, with a few cases of dyspnea, and chest radiographs showed invasive lesions in both lungs. At present, all cases are being treated in isolation, close contact tracing and medical observation are underway, and hygienic investigation and hygienic treatment of South China Seafood Market are also being conducted.”

Partially due to comments made by the U.S. President Trump, there is a distinct impression that the Chinese government had been hiding this new corona outbreak. From this announcement only, it is hard to know exactly when these 27 cases were identified. However, we need to stress the fact that they announced here the symptoms of the “viral pneumonia of unknown cause”, not only the virus’s existence itself. It should also be reported that at this stage “no human-to-human transmission”  had been confirmed.

At the beginning of the year, on January 3, 2020, the Wuhan Municipal Health and Wellness Committee made another announcement.

“A total of 44 cases have been diagnosed as the ‘viral pneumonia of unknown origin’ including 11 severe cases, and the conditions of the remaining patients are stable. All cases are currently being treated in isolation at the Wuhan medical facility, while 121 of the close contacts are being followed up for medical observation.

This is just a list of facts, but you can feel the tension in it. And it goes on to announce:

“As a result of the investigation, some of the patients were found to be the owners of South China Seafood Market in Wuhan City. Preliminary investigations to date have shown no clear evidence of human-to-human transmission, nor has it been transmitted to healthcare workers. “

At the same time, it is stated that the analysis of “viral pneumonia of unknown cause” is underway.

“Analysis of the pathogen (including nucleic acid testing and viral culture) and investigation of the cause are underway. It does not appear to be a common respiratory disease such as influenza, avian flu or adenovirus infection.”

Two days later, on January 5th, they made the following announcement.

“Fifty-nine patients have been diagnosed as ‘viral pneumonia of unknown origin,’ including seven critically ill patients. The conditions of the rest of the patients are stable. At present, all patients are being treated in isolation at the Wuhan Medical Center and no deaths have been confirmed. “

Here, the onset date of the disease in patients was shared for the first time.

The announcement is merely a brief description of the situation at the time, but it is clear some information had been made public, if not all. Of course, at this stage, the world is not yet paying attention to the announcements in Wuhan, China.

The original article in Japanese is here.