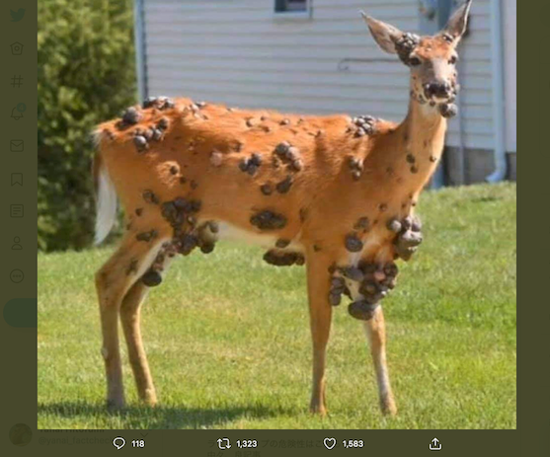 A photo of a deer covered in tumors with a caption claiming it had eaten plants and trees sprayed with Monsanto’s Roundup was posted in Japanese on July 19th and immediately went viral on Twitter.

This post was previously seen in the United States and elsewhere, and was fact-checked by Politifact. It was judged to be “false” because the tumor in the photo were confirmed to be fibroids, which are fairly common in New York deer and are caused by a virus spread by insect bites or direct contact with other infected deer.(Says a deer became “riddled with tumors from eating plants sprayed with Monsanto’s Roundup.”）With Politifact’s approval, InFact introduced the results of this verification and alerted Japanese readers as the fake information.

The viral photo is identical to a photo of the deer that was originally uploaded to the “Your Wild Ohio – Hunter” Facebook page on October 12, 2017. The next day, on Facebook, a Japanese user reposted it with reference to “Roundup” and received more than 130,000 shares, but is now branded by Facebook as “false information”.