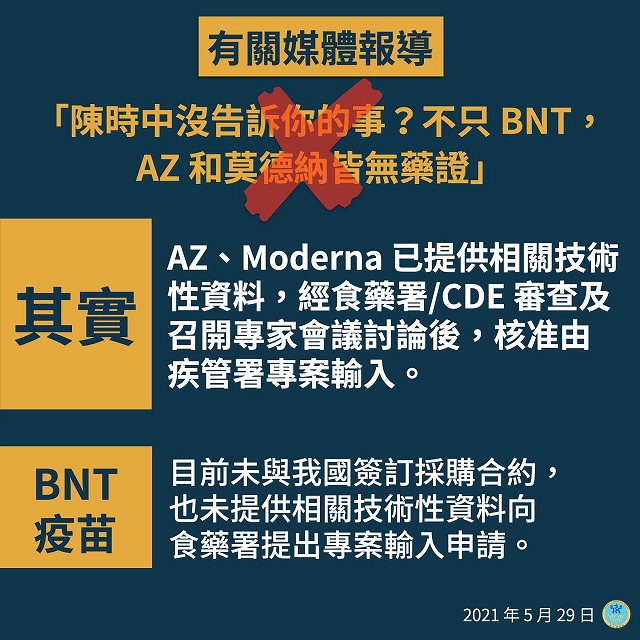 “The only COVID-19 vaccine approved in Taiwan is made by AstraZeneca ” (Tweet by Kohei Watanabe, a LDP prefectural assembly member, posted June 4, 2021)

On June 4, the Japanese government sent 1.24 million doses of AstraZeneca’s COVID-19 vaccine to Taiwan, where the infection is spreading rapidly. As for AstraZeneca vaccine, there have been concerns about adverse reactions due to reports of deaths from blood clots in Europe. Although approved in Japan, the schedule for its use was not yet decided at the time. Donating AstraZeneca vaccine to Taiwan under such circumstances raised questions in the Diet. This Tweet was posted by a LDP prefectural assembly member on the day the vaccines were shipped.

To verify this claim, we asked the Taiwan FactCheck Center (TFC), which works on fact-checking in Taiwan, for an investigation.

“At the moment, the Taiwan Food and Drug Administration (FDA) has approved AstraZeneca and Moderna vaccines.”, responded Chen Huimin, Editor-in-Chief of TFC, on June 7.

“Taiwan is now facing a tough situation, so we expect that the authority will soon approve Pfizer’s and Johnson & Johnson’s vaccines as special cases.”

In fact, there were reports in Taiwan that neither AstraZeneca nor Moderna were allowed in Taiwan, in a form of criticism of the government. The image above is the official announcement by the Taiwanese government (dated May 29) in response to these reports. It says, “AstraZeneca and Moderna provided us with technical data. Taiwan FDA and Central Epidemic Command Center examined the data and CDC approved as a special case and imported their vaccines.

Taiwan approves not only AstraZeneca vaccine but Moderna’s.

“The claim was already corrected by retweet on the same day”, replied Watanabe to our investigation.This article is not to criticize Watanabe, but to report our investigation results, including the fact that the correction was made. This is also not meant to criticize the Japanese government’s efforts to donate Taiwan with AstraZeneca’s vaccine.

On June 4, the day the vaccine arrived in Taiwan, the Taiwanese government issued a statement saying, “We sincerely appreciate that Japan provided prompt support to Taiwan despite the serious situation in Japan, too. Japan is a valuable friend. “